Local Subscriptions in the Wild: Learning from Panera, Pret-A-Manger and Sweetgreen 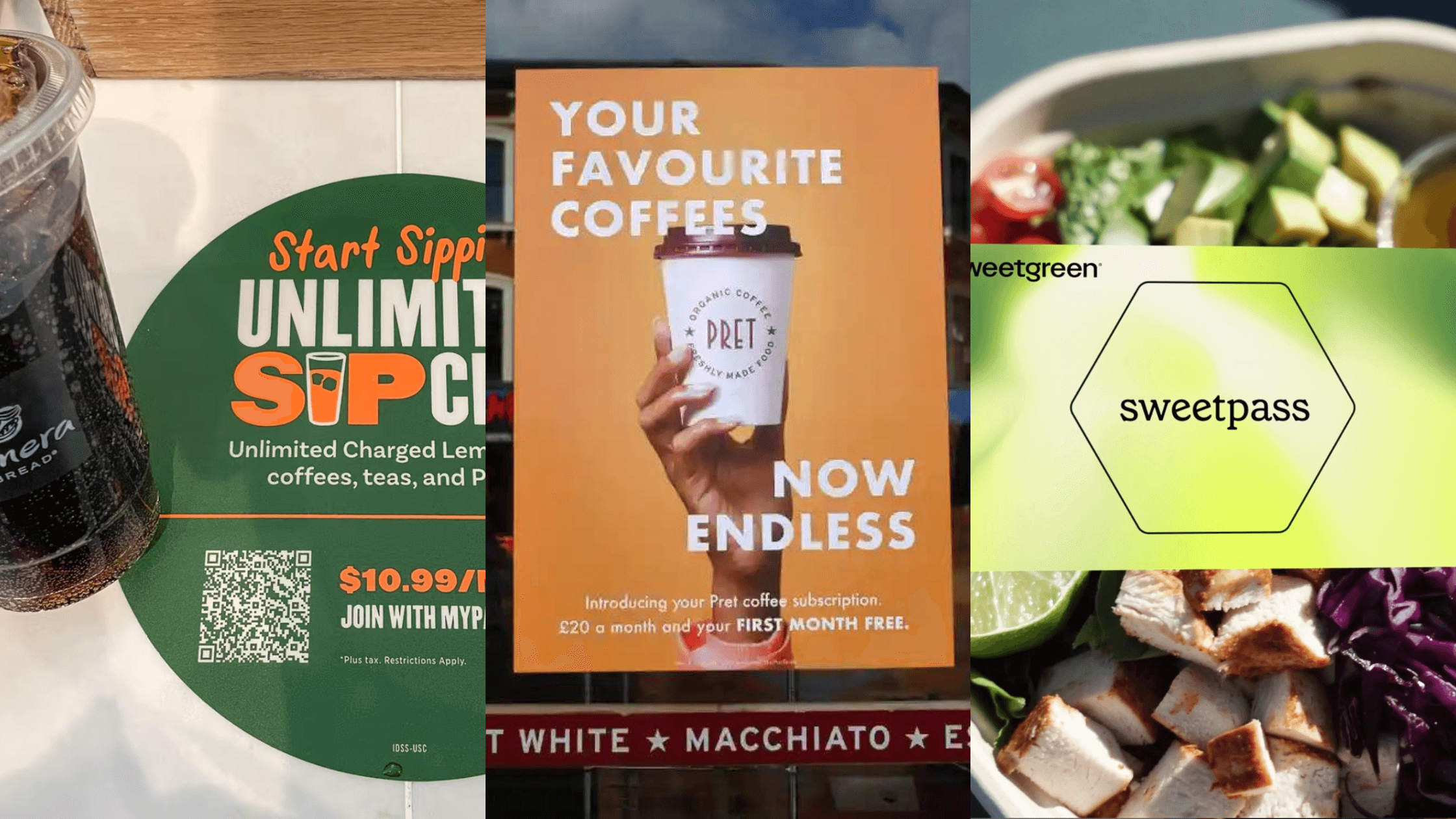 Local, in-person subscriptions are a new phenomenon and there’s no better way to understand the potential than to look at a few examples. Today we’re featuring local subscriptions launched by innovative brands like Panera, Pret A Manger and Sweetgreen. While those brands may be first movers, we believe this is the start of an important movement. Subscriptions create potential for an important new engagement model to emerge. One that better aligns consumers and brands and leads to deeper engagement. Let’s dive in and get inspired…

Panera made waves when they launched their $8.99 coffee subscription in 2020. Since then they expanded the program from a coffee club to include all beverages, and they did so for good reason. According to Forbes, Panera's coffee club had grown to over 600,000 members, of which 300,000 are paying subscribers. Panera’s subscription tells an incredible story.

First, Parena reports that 43% of its coffee subscribers were new to the brand. That speaks to the ability of a subscription program to drive new business and create a differentiator.  Subscriptions are innovative, few brands have launched anything comparable. This creates an instant differentiator in an immensely competitive market.

Second, Panera reported that beyond the recurring revenue driven by the subscription they are also seeing a boost in sales. Many subscribers end up frequenting their restaurants more often and buying more items. Early adopters of Panera’s coffee club frequented its eateries at eight times more than in the past and 30% of them added a food item to their check.

Pret A Manger, a London based chain of coffee / sandwich shops has a two-tiered subscription. Perhaps unsurprising, but Pret-a-Manger is owned by JAB Holding Co. which also owns Panera, Kirspy Kreme and Peet’s. Pret A Manger first launched their subscription program in 2020 in the UK with a single tier at £20/month. They launched a two tier program in the US at $19.99 and $29.99 per month in September 2021.

We find the contrast between Panera’s and Pret A Manger's programs interesting. While Panera offers a single tier, Pret A Manger went with two distinct subscription tiers. This accommodates a wider selection of coffee served, including premium espresso-based drinks. More expensive drinks are available at the $29.99 tier with frequency based limitations to prevent potential abuse of the program.

While subscriber numbers have not been published, the launch of the current program came after an initial test. Pret A Manger offered a monthly coffee pass that had to be manually renewed each month. After a successful trial run they introduced their current two-tier subscription program. Through their subscription, Pret A Manger created a program that gives customers choice, convenience, encourages visit frequency. We’ll be watching to see how their subscription program evolves.

Sweetgreen is an innovator and outlier when it comes to digital. In the most recent quarter, over 67% of Sweetgreen’s revenue came through digital channels. Equally amazing is that the bulk of that volume coming through their own app and website. So it’s no surprise that Sweetgreen was among the first movers to pilot a subscription program this past January.

Sweetgreen’s subscription program, dubbed Sweetpass, was designed as a limited test run. By all accounts the program was successful and Sweetgreen is rumored to be launching a new loyalty app next year with subscriptions built in. What really impressed us was the simplicity of their program. For $10/month subscribers got a $3 credit during each visit. The math couldn’t be simpler, visit more than 3 times and the pass pays for itself. It strikes us that the $10 price and the $3 discount hit the bullseye, making the program meaningful and accessible at the same time.

In a recent interview, Sweetgreen’s Chief Digital Officer Daniel Shlossman noted the program’s impact on loyalty. “We saw that, no matter what type of customer you were, you came back more often in that period,” he said. Customers who had not been active in some time and new customers alike increased their visit frequency. Sweetgreen’s example shows the power of subscriptions to help any customer behave like your best customers.

At Angle, we’re all-in on subscriptions and we can’t help but be inspired by what we’re seeing from these amazing brands. With that said, across all those programs there's a consistent theme of testing before going big. At Angle we’re building our platform to empower local businesses to launch subscriptions, but do so in a way that encourages experimentation. Our goal is to make it easy to find the right formula for subscription success, and that formula is unique to every business.

Thanks for contacting us!

You will get back to you very soon.
Back to Website
Oops! Something went wrong while submitting the form.

Thanks for signing up!

We’ll be in touch very soon.
Back to Website
Oops! Something went wrong while submitting the form.